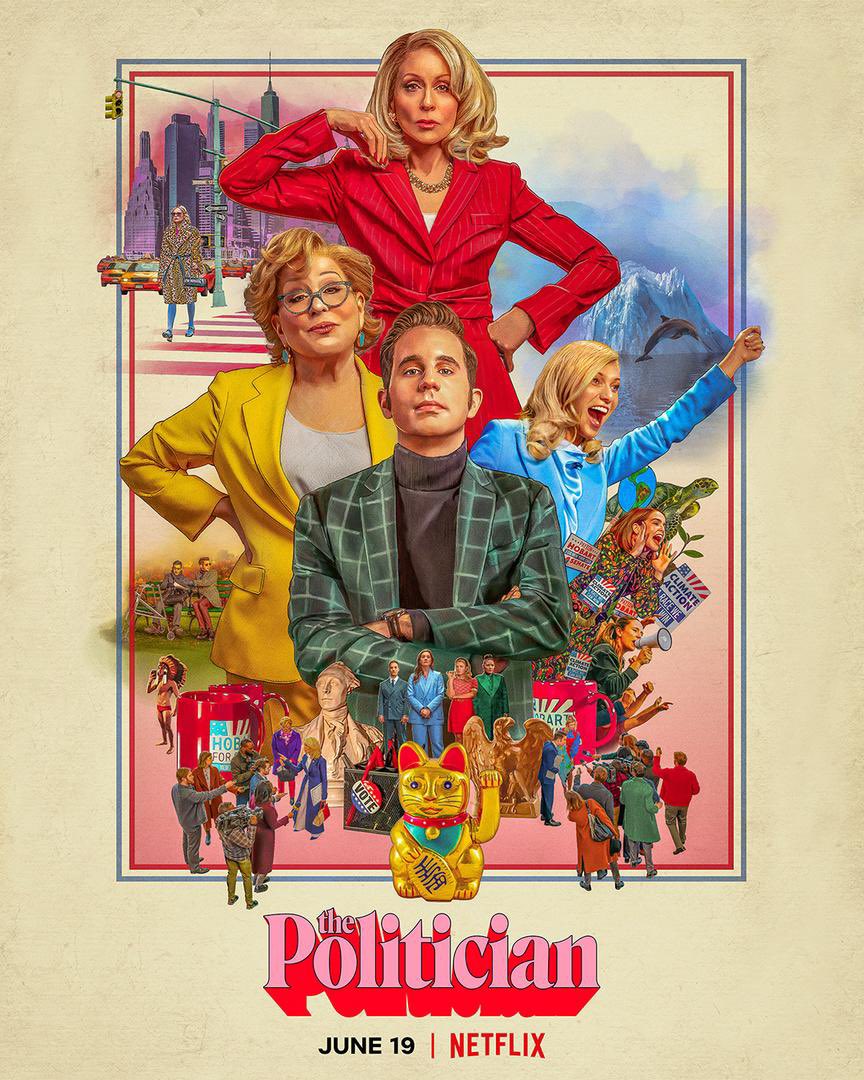 Ben Platt does it again serenading us with a second series of The Politician. Season two gives us a show that presumably is all about politics and the people who run for office. The audience gains an insight of the manic world behind elections. But the respect shown towards the political world within the series is incredible low, ending a political showdown with a children’s game of rock, paper scissors. Payton (Ben Platt) injects ambition into the veins of The Politician focusing on justifying how they act to get to the end result. But on purpose, it comes across ridiculous when The Politician ignores all details of either the means or the end.

We left Payton in season one after he unfairly won his high-school student body presidency. Now he has advanced to the next level taking on Dede Standish (Judith Light) in the race to become New York state-senator. The race turns dirty bringing skeletons on both sides out of the closet including a passionate throuple relationship, Payton dating nearly identical blonde women and an old Geronimo Halloween costume. All this and more gives the second season a much snappier pace than season one.

The Politician doesn’t dive deep into its content enough and sometimes only feels like it skims the surface. Its characters don’t feel fully significant or important, and their feelings detached to the storyline. The three way marriage for example, instead of exploring the true reaction and blowback from the public knowing about it, they take a lazy turn in the narrative. Suddenly we find Payton in a similar situation giving the whole throuple storyline a sense of insignificance and repetitiveness.

When Payton reaches an impasse struggling with his inner demons of who he wants to be his true character is shown. He faces some hard decisions when he starts to question how far he would go in order to get what he wants. This is when The Politician attempts to undermine the treatment of corruption and generational politics. The balance between taking global warming seriously and letting the youth take over from the older generation gives the series a sense of realism, two antidotes that we constantly hear in our politics. When Payton finally decides to embrace the win-at-all-costs mind set he becomes a character that isn’t held up as a good role model. He’s not presented as a saint. Even when an Apache headdress picture is leaked to the media, Payton somehow twists it to come out the other side as someone who is honouring the legacy of Geronimo. But the audience can clearly see the lies and corruption he’s weaving to get support of the public.

The Politician clearly wants Payton to be liked and sympathized with, showing us the struggle he is under losing his motivation and himself within the election. With his drive to win you get a sense of the lack of caring behind his words. In series one this emptiness didn’t feel majorly impacting on how things came across on the screen. But now in New York, graduating this emptiness into the real world scenario came across false and deceiving.

The Politician has set itself up for another season and after season two I eagerly await its return. It will be interesting to see where Payton’s limits end and if his next adventure will make him or break him.