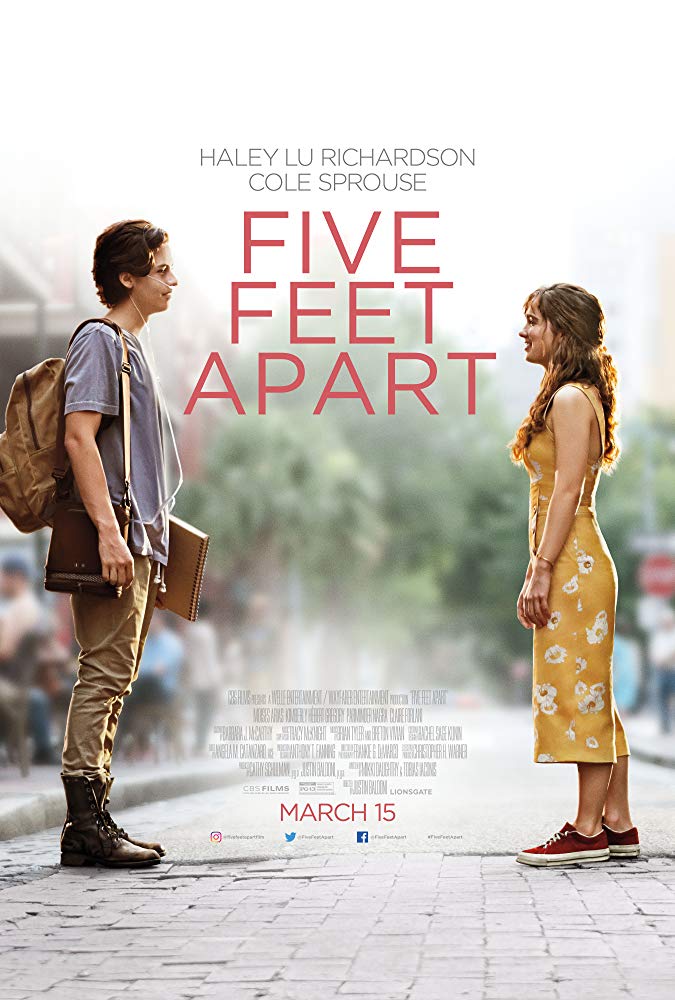 A romantic emotional story about a boy that meets a girl, but cannot get too close to her without both of them dying. It’s something new we haven’t seen before on our screens. A romantic story, which doesn’t look like there’s a happy ending for the two of them.

The movie is set in a ward at a hospital, teenager Stella (Haley Lu Richardson) returns for feels like the umpteenth time. She is an enthusiastic, quirky and bright teenager that has fallen victim to cystic fibrosis – a horrible and incurable disease that completely takes over your life, making her incredibly vulnerable to respiratory infection.

A new boy enters the ward, Will (Cole Sprouse), who doesn’t take his experimental treatment seriously. He is reckless and fails to take his medications on time, ignores the recommended exercises and sits in the freezing cold night air on the roof contemplating jumping to his death. His attitude drives Stella crazy and she takes it upon herself to change it for the better.

Another patient and dear friend to Stella is Poe (Moises Arias), the gay and humours character, sees that Stella’s intentions turn quickly to love. The caring and loving nurse Barb (Kimberly Hebert Gregory) strictly and rightfully sets the rule of keeping the two love birds six feet apart incase one of them or both catch a fatal life threatening cold. But Will’s mindset is what’s the point of following the rules if you’re already dying. He’s the brooding artist type and Stella is his loveable control freak. What could go wrong?

With all this going on the movie doesn’t really need to try very hard to tug on your heartstrings. It naturally shows the growth of both characters and how they both look at life differently being in the same situation. The emotions rocket throughout the film dealing with heartbreak and grief.

Five Feet Apart is certainly a tear-jerker, one of the best that come out in recent years. The reason why it works so well is that the story is so raw and so real. It makes the audience question how people with disease fall in love when they can never get close to each other. It would be easier said than done to make sure you fall in love with someone that doesn’t have cystic fibrosis, but you can’t ignore what the heart feels. This technique keeps the audience on the edge of their seats, not knowing if the next breath of the two characters will be their last. This is even more obvious with such a soppy and sad soulful songs chosen to emulate the emotion in the scenes.

Never before has a movie explored and explained the torture of cystic fibrosis in a daily life, but also hasn’t been exploited for ultimately a cheap Hollywood romance. The movie does have a questionable outlook. After the trailer the guardians of the cystic fibrosis rule book thought the movie encouraged teens to take stupid risks; and real cystic fibrosis felt that the movie potreyed them as victims.

But the good outcome Five Feet Apart is that more young people know about the incurable disease. The horrible fact that these patients have to go through daily routines of medication, exercise a pain and as soon as they turn 18 (in America) they have to find the money to pay for it themselves.  Here’s hoping that the high percentage of the money made by this film is donated to help the research of Cystic Fibrosis.