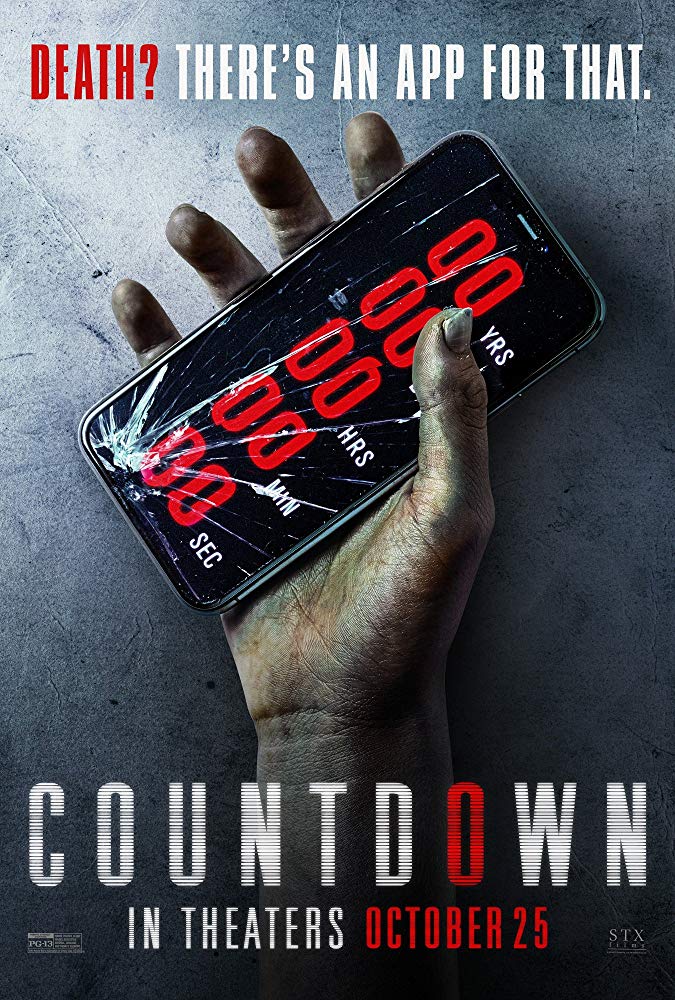 We all remember the early years of the internet; spending hours and hours googling websites like ‘Death Clock’ to keep us amused. Yes, a website that tells you when to die… and when I was younger this wasn’t believed but it really piqued my morbid curiosity (without sounding like a psychopath). It was only a matter of time for this concept became a horror movie franchise.

Countdown mainly concentrates on a nurse, Quinn Harris (Elizabeth Lail), who downloads a mobile app called Countdown. This app has been circling around lately and has a very deadly terms and conditions, which most people don’t even read. I never read terms and conditions to totally relatable. This app is one page, very simple design that gives you a countdown on how long you have left to live. Quinn is shocked by the discovery she has only two days left to live, not fully believing it she tries to change her plans around the time of her predicted death and ultimately cheat the app, and death itself.

This running from fate idea isn’t new to the horror genre, following movies like Final Destination; we all know something bad is about to happen to our main characters. We go through a similar motion in that the main characters are trying to cheat death and figure out how to do so. These movies concept usually concentrates on showing gruesome and creative death scenes, instead Countdown tries to take the route of character development. Using technology and commentary to solidify Quinn’s morbid interest, the deaths are quickly ended with a demon.

I know a few of my friends dismiss a film straight away as soon as it indicates a demon, and I’m starting to agree to be honest.  During this film as soon as the demon aspect is introduced, unfortunately, it all becomes one big mess of ridiculously supernatural unexplained list of events. The ending was unexpected, and in my opinion was a good twist in character development. But, by that point, I felt like it was too late to save the film. Countdown was filled with a few jump scares and dark scenes supported by a strong cast, but this all fell short due to the plot being empty and bland.

Overall, Countdown was an alright film. It did have potential and hopefully will learn from its mistakes if they carry on the franchise. Swap out the main focus of character development and overpowering demons with a mysterious plot and creative shocking death scenes, and we might get somewhere.

While I didn’t go and see it in the cinema, I’m kind of glad I didn’t. It felt like a decent Halloween movie to watch on the sofa. Order in the pizza, have a few drinks and switch the lights off with some friends. Pique your morbid curiosity as your Countdown has begun!