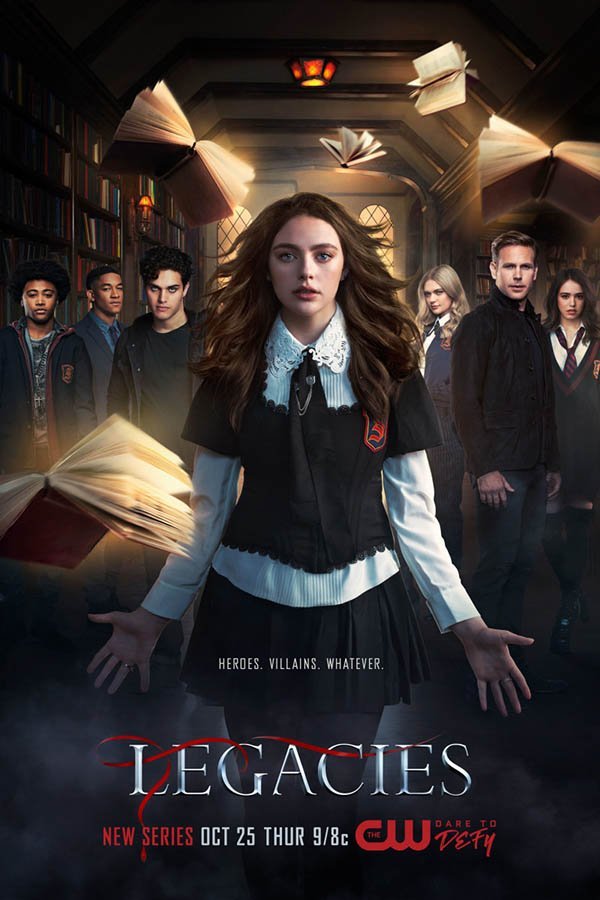 From the beginning of the season we encounter some mystical monsters we haven’t seen before within Julie Plec’s thrilling universe. Yes this season is aiming big, but it’s working. The series was hit with a lot of doubt before it’s premiere, from fans wondering if it would live up to its predecessors, The Vampire Diaries and The Originals. But what this show is doing is not rehashing the past and what came before, but instead setting itself completely apart from them, encountering new and exciting beasts.

The show concentrates on a different monster every week building the tension and plot twists towards an amazingly breath taking finale. Our main character is Hope Mikaelson (Danielle Rose Russell), the badass daughter of Original hybrid Klaus Mikaelson (Joseph Morgan) and alpha werewolf Hayley Marshall (Phoebe Tonkin), learning to control her powers, pushing the boundaries with other supernatural teens at the Salvatore Boarding School. This exciting new structure is like a mixture of Charmed and Buffy the Vampire Slayer meets the darkness of Teen Wolf storylines. What is not to like?

Hope is thrown straight into action as she must track down her predicable love interest Landon (Aria Shahghasemi), a seemingly normal guy who stole a mystical knife, leaving a bus full of butchered bodies. Though Landons friends swear this is not his normal behaviour, the mystery of weather or not he is a villain of the season or a victim is one of the most cryptic and interesting.

It is hard not to compare Legacies with the series that came before, being a sin-off of a spin-off will force any audience member to do so. So lets give that a go. In The Vampire Diaries the supernatural characters have to hide who they are, trying not to expose their abilities and true natures to the human world, with the fear of being hunted and killed for being anything but human. In The Originals we follow an older generation of supernaturals who are busy fighting and preventing the end of the world to truly enjoy and embrace the freedom their powers and gifts allow them to have. In Legacies, we finally have a place where the supernatural characters are taught to embrace and enjoy their abilities and even have a little bit of fun with them.

The series itself gives a light-hearted approach to witchcraft, where the other series couldn’t, where previously they only rely on witches to either save them or to protect them, this time Legacies allows the audience to see the more fun and relaxed side of magic. Where else would you expect to see a bunch of teen supernaturals getting high off weed laces with magic sex hormones? This series delivers where both pervious series couldn’t, giving us both dark, entertaining, familiar and mystifying storylines throughout.

Even though Legacies is showing itself as a completely different show, it hints and delivers not so subtle easter eggs as little treats to the longtime Vampire Diaries fans. We have mentions of Stefan Salvatore Memorial Library and cameos of world-traveling hunter Jeremy Gilbert. However, if you’re coming into the series as a newbie without watching any of its predecessors, then this show also appeals to you. With a lineup of mystical, ready for action characters that tick every diversity box from different species, ethnicities and sexualities, you will struggle to find someone in the series you wont relate to.

The season builds to a dark ending ready for more adventures and mystery in season two. Only time will tell if the audience will fall in love with the series the way they did with Vampire Diaries and The Originals, but I am one viewer who has. The show is actually a great standalone and got me wanting more after every episode. With season two just starting back in America – I will be watching it eagerly to see what happens next.